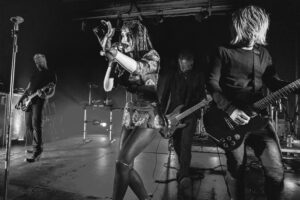 Starting in 1998, the duo of Free Dominguez and Bruce Somers formed Kindeythieves and have releasing music ever since with albums and Ep’s Trickster, Phi in the Skyin, Zerøspace, Trypt0fanatic, The Invisible Plan and The Mend.

Kidneythieves have also found success in landing their unique style of music in movie soundtracks, on TV shows, and in video games from the day the duo started making music together. On the soundtrack front, their cover of the Willie Nelson-penned Patsy Cline hit “Crazy” was in the feature film Bride of Chucky and their song “Before I’m Dead” was featured in Queen of the Damned starring the late Aaliyah. Among their small screen credits are “Arsenal” in CSI: Miami and “Taxicab Messiah” in the cult favorite Warehouse 13.

Five songs from Trickster were also featured in the video game Deus Ex: Invisible War. The songs were performed in-game by the character of NG Resonance, which is a fictional pop star voiced by Free. Additionally, the band’s “God in Fire,” a collaboration with Japanese video game composer Takeharu Ishimoto, was featured in Dissidia 012 Final Fantasy.